Dún Laoghaire is a small suburban seaside town, located just 12 km’s from Dublin by train. Actually, it’s a part of Dublin and it takes about 15 minutes to reach it from the city centre but when you are already there, nothing reminds you the big and busy capital city and you feel yourself like in a real summer resort town. Long and nice promenade takes you along the seaside and calm and well-rested people are walking their dogs, riding their bicycles and strolling along the seashore, sitting on the benches and enjoying their 99 Flake ice-creams. Even the weather seemed to be totally different from the city weather and we had to take off our jackets and put on the sunglasses and of course, buy the 99 flakes at once.

I was wondering why do they still call them 99-s when they don’t cost 99p-s or there doesn’t seem to be any other connection with that number and so I had to google it. And the result was amazing – the ice-cream served in a cone with a Flake 99 is UK-s (and probably Irish) favourite ice-cream and I pretty much have to say that it’s my favourite ice-cream too for now. But calling them 99 has a long historical touch – the majority of ice-cream merchants in the 30-s were Italians and in the days of the monarchy, the Italian King had an elite guard consisting of 99 soldiers. After that everything elite or first class was called 99. That’s how they started to call them so. I also found that the Flake has to be 99 mm-s long and the cones had also cost 99 p-s in the past, but somehow I like the story of Italian elite the most. Now I know that my taste is elite 🙂 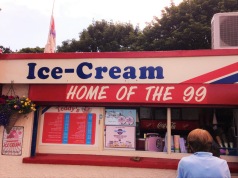 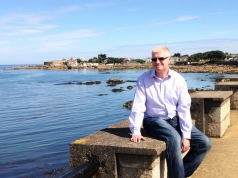 The name of the place is very hard for me to remember, especially the pronunciation but I am so used that the Irish names are the tough ones and when you learn it, it’s not difficult any more – /dun lieeri/, it sounds for me, and it means The Fort of Laoghaire. The high king of Ireland, Lóegaire mac Néill, chose this place as his sea base from where to carry out raids in the 5-th century. The town Dún Laoghaire dates from the 1820s and was called Kingstown at first. The two piers were founded in the 19-th century and the harbour is now one of the largest in the country. We picked the East Pier for our walk and after googling it came out to be the most popular and even used in some movies. The long walk ends at the old Lighthouse where you can also find  a small cafe and the ice-cream parlour, selling the Flake 99, of course.  The buildings on the pier reminded me a lot of our Haapsalu promenade, probably all the summer resorts have something in common 🙂 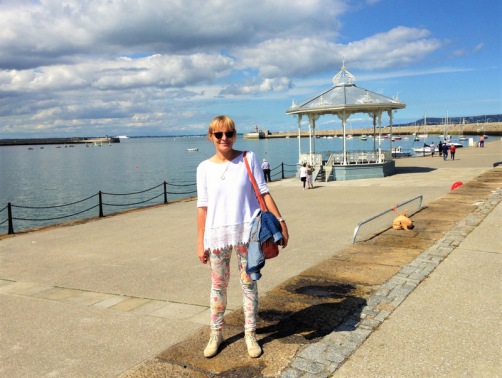 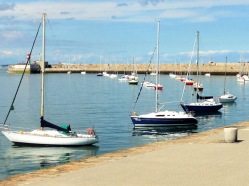 On that day Dún Laoghaire was hosting the Laser Radial Youth and Men’s World Championship and we saw thousands of small boats coming back to the harbour. The amount of them was unbelievable and they still kept arriving when we left. 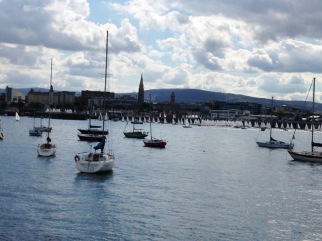 The piers seemed to be also a favourite place for local guys who practised diving from the quay. That was a bit terrifying to watch, especially that the water didn’t seem to be too warm and not too clean either but this little matter didn’t stop the boys. 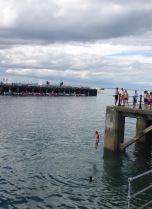 I have to say it was one of my most beautiful days here and Dublin still surprises me – you can find so many different sides of it and you never get bored. And seaside places are among my favourites anyway.