As my son had his birthday in May and I hadn’t seen him since that I wanted to give him a present and as we see too often because he lives mostly in Canada, I gave him a trip that we could make together. As the time is limited, I tried to pick the best one and so we started early in the morning with Paddywagon Tours, which seems to be a great name in Irish tourism business, you can see their green signs all around the town. Paddy is a real Irish nickname, of course, after St Patrick, who has been probably a bit greater doer than Paddywagon, and it’s said that besides bringing Christianity to Ireland, he also got rid of all the snakes. Who knows, maybe they just didn’t have any snakes here even before St Patrick’s time 🙂

Our tour guide is named John and he promises to speak as a real Dubliner and so he does all through the tour. He has thousands of jokes, stories and competitions, he predicts the weather, sings Galway girl, teaches us to swear politely and in an Irish way, using the word “feck”, which really doesn’t sound too rude, but a bit funny. And the least but not the last, at the same time he drives the big green Paddywagon bus with joyful elegance through all these narrow roads, and never loses his positive spirit, even not when we lose a couple on the Baby Cliffs. Ok, they just sat on the wrong bus and met us at the next stop, which means that at the same time there were more than one Paddywagon buses, to be honest, there were three.

The first stop is a small colourful fishing village called Kinvara where we can stretch our legs and take some photos. The weather is not very promising but our guide convinces us that we will get a sunny day on the Cliffs of Moher and I have to tell that he was right. In Kinvara there are not too many houses, so they have had a possibility to paint them all in different colours, which gives the town a nice and friendly look. Almost every house hosts a pub or a small shop and they have also a little port for boats. 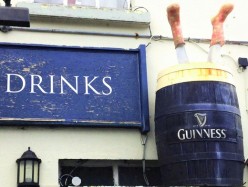 The landscape is green, so green and even greener, with some rocks and lambs, cows and small houses, sprinkled over all that greenness that make up the Emerald Island. The name Emerald Island is the perfect match to Ireland, if you haven’t seen it, you will never believe how many different shades of green are possible to find there. The stone fences seem to be here as popular as on Estonian Islands, so I am pretty sure about our same Viking ancestors.

After twirling on the crooked roads that go up and down, back and forth, we end at the ruins of Corcomroe Abbey, a place where the Cistercian monks used to live in the 13th century. The abbey is located in Cleare County and is made of limestones, again something familiar. The views under the abbey vaults are nice, green and bumpy, but the big dark clouds are following us and when we are running on the bus it rains already. One of the Irish kings was buried under the abbey and lots of other noble and not so noble persons into the small graveyard that surrounded the abbey. Someone asked the guide if nowadays the graveyard was used and in which reasons you could be buried there. The guide answered that the only reason for that was to be dead (and of course preferably local, I guess). 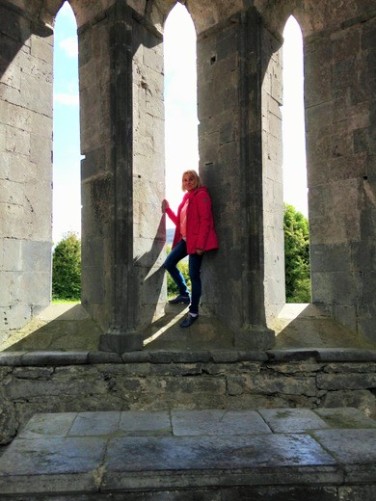 Followed by the rain, we reach the Baby Cliffs and the sight is magnificent, a little bit scary because of the rain and wind and height, but you can feel that there’s the Ocean ahead – the Atlantic Ocean. You can even smell it. We take our photos, admire the nature and get back to the bus, which seems to be the right one. Because of the rain we couldn’t see the three islands which are supposed to be near the coast, maybe just a little bit.

The next stop is in Doolen, in a small windy seaside village, where the houses are all white. Although the village is tiny, just only a handful of similar looking houses, there are three big pubs and in one of them, we are going to have our lunch. The afternoon band is again playing Land Rover, but it is a very touristic place where they are probably living from the clients of these tour buses and why not to listen to Land Rover in the afternoon. 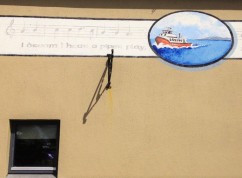 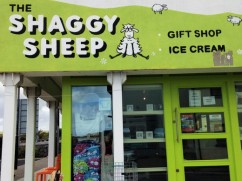 And now the main attraction – we really reach the Cliffs of Moher and the weather really improves, exactly as our John had promised. We are happy to have the sun, the clear sky, and a fantastic view of the grandiose cliffs. We haven’t got rid of the wind, but somehow the wind is a part of that day anyway. At firs,t we keep on the track, but when it ends and all the others are going on, we also start to balance on a narrow path, which is quite slippery after all that rain, but the panorama gets better and better and it’s so awfully great to walk there and feel the nature around you and the Atlantic almost just under your feet. These 2 and a half hours are totally too short for that place, so we miss the other side and have to go back to the bus.

On our way back we have one more short stop at Bunratty Castle and filled with good emotions we reach Dublin at 8 pm. Wow, it was a great day, even if I am not a fan of bus tours, but anyway, if someone asks me, I would suggest this tour to anybody, especially if you don’t have too much time and you are not going to rent a car. So it came out that the birthday present for my son was also a great present for myself and I am so lucky that I did it. 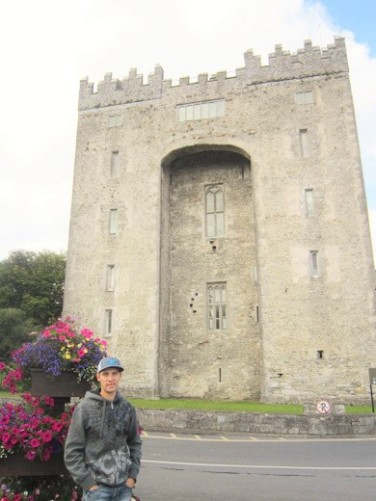 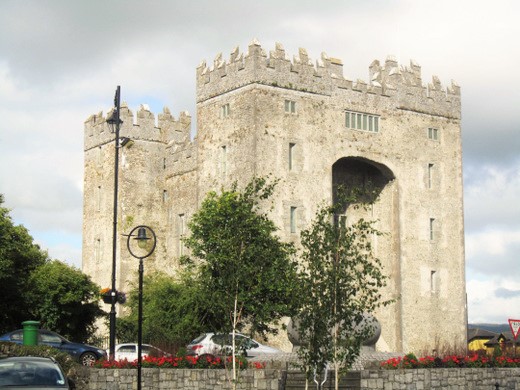