One of my favourite places here is Howth and when we looked up the events calendar for St Patrick’s Day’s weekend we were happy to find that there was a Dublin Bay Prawn Festival going on in Howth. It’s something that cannot be missed, ok we had never done it but we both love seafood and of course Howth, so it was the only option to choose.

It’s easy to get to Howth from Dublin – you just have to get a train from Dublin Connolly Railway Station, by a return ticket and wait for a train and it takes about 20 minutes to get there. In 2014 we took a long hike on the rocks in Howth and already then promised to go back there as soon as possible but somehow it took a bit time. but it was worth to wait for it because the Festival was exactly what we expected it to be. When entering you could buy tokens for getting your seafood – 20 euros for three dishes on your choice and if it’s not enough as it was for us, you could buy the next round.

We started with the real Dublin Bay Prawns and they were big, fresh and tasty and there was a lot of them on the plate. the token system helped to avoid the queues because the sellers didn’t have to deal with change and they had only to gather the tokens and put the food on your plate and of course keep cooking the new portions because the crowds who had come to enjoy it despite the grey and a bit rainy weather, were huge. 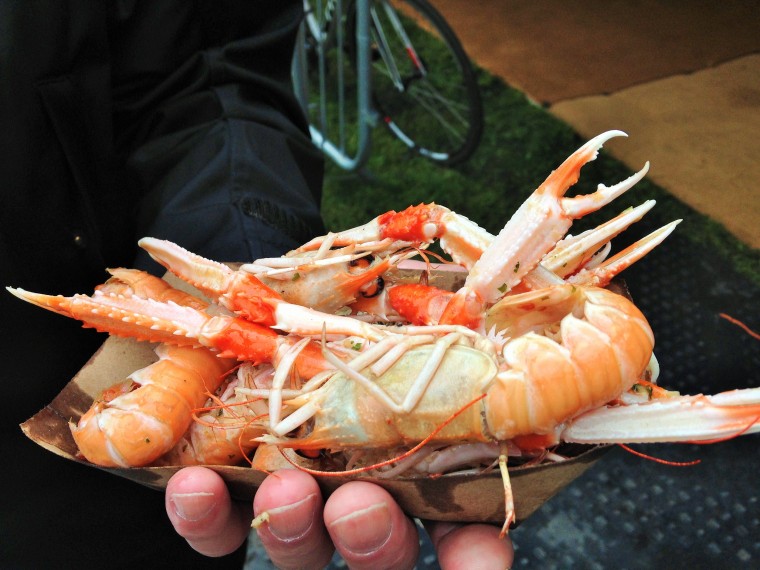 Then we continued with some nice squid rings and fritted tiger prawns which were really tasty and again so fresh that they almost melted in your mouth. Squid rings are one of my favourites but of course, they have to be fresh, not frozen which gives them a bit gummy taste.

And then it was totally time for oysters. The last week in France I had a chance to be taught how to open the oysters and to be honest I had only tasted them once before that and then, of course, they were not caught on the same day or probably not even close. I wasn’t the best student at opening the oysters but I was quite good at eating them, anyway, it was very interesting to see how the professional French chefs opened them with such an easy and skill that you could only stare there with your mouth watering for the new one to be opened. and now, just a week after that I was again enjoying the oysters, this time the Dublin Bay oysters, or wherever they had caught them. The other photo is taken in France, whit some better students as I was – they were able to open the oyster 🙂

And we finished our delicious day with some mussels, something that is a must be in Dublin – you know the song of poor Molly Mallone who was selling her mussels and cockles alive, alive ohh. So with all my thoughts with poor Molly I was enjoying the last delicious seafood of the day and then we went and bought some monkfish from the small seafood shop on the pier – there are lots of them, besides the little seafood restaurants. and we will definitely come back in summer and do it again.

And here you can see what we made with our monkfish on the next day. Monkfish is also one of my favourites and I found it out during my Dublin time. 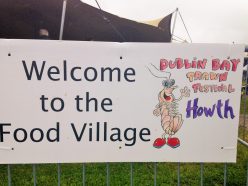 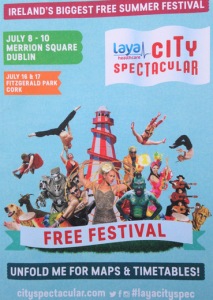 The Street performers festival Laya City Spectacular has been taking place in Dublin and Cork for 11 times already and I have been visiting the last three of them. As I always come at the beginning of July, I have spent my first weekend visiting that festival, taking place at Merrion Square park. It is mostly meant for families and children, except my very first time in 2014, when they had also two days full of music – different young musicians from Dublin – who performed inside the park. Now it is mostly for different street performers like acrobats, magicians, jugglers and painters all over the world.

Streetfood from the red bus 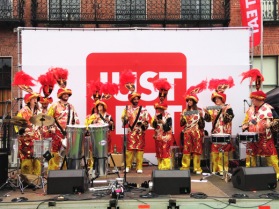 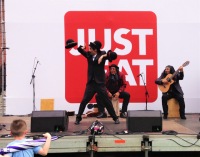 This year there was also a big street food festival JustEat going on beside the park. The whole street was covered with a grass carpet and different kind of food was sold from the stalls. There was also a small stage for the musicians, but as it was straight on the street, where people were passing by, it was a bit too loud and the musicians were also not so good as they were at the 2014 festival. 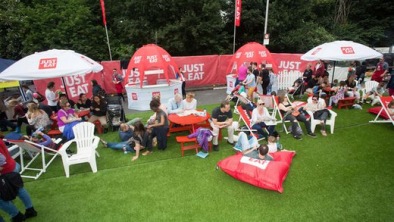 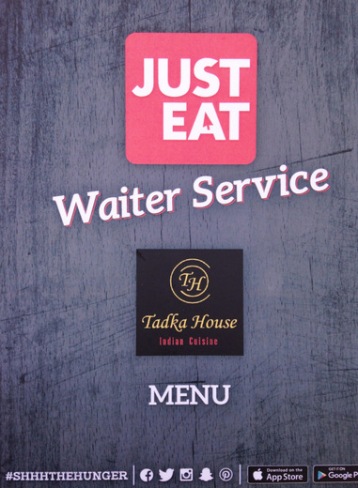 As the weather was really nice, we spent a lot of time there, walking around, watching the performers and listening to the music and got even caught by a photographer who asked if he can take photos of us for the JustEat webpage. So now we have the proof that we really took part at the festival 🙂

Click HERE and see all the pictures taken by the photograph Allen Kiely from Akdigital – Digital Agency photo.video.design.