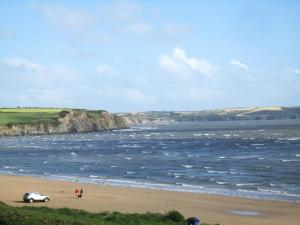 I have been really happy to spend again some time in Duncannon, a nice small village at the seaside where the sea lies just behind your garden fence and where it’s possible to watch the secret life of the sea. This time, it was mostly stormy, even when it wasn’t raining and when going on the beach, it was possible to feel how the wind is fighting with you and holding you back when you want to walk. But anyway, there were a lot of brave people walking their dogs or just wandering around despite the heavy wind. I tried to be among them and spent some time taking photos and listening to the song of the wind and struggling with the flying sand. 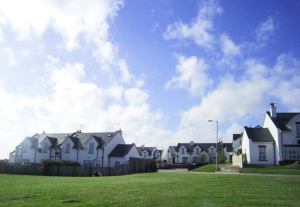 There are lots of marvellous places around Duncannon and this time I had a chance to visit quite a lot of them. The village itself is also very nice with picturesque views, some pubs, locals and summer visitors, small shops and sandy beach. But if you drive a bit you can visit easily the Hook peninsula, and the nearby towns Waterford and Wexford, the last one has given the county its name too.

I had been to Waterford before, but that time my stay was limited at the bus station, waiting for the bus that took us to Duncannon. This time, I was lucky to see the town twice, and try again this quite common way of travelling from one side of the river to the other. So it means that we just drove on the ferry, and after 5 minutes off again, and very soon we were in the centre of Waterford, where the Street Performers’ Festival took place. The first time when I saw this way of travelling, was when going to Cobh. This is something that we don’t have, but here it seems to be very common.

The Street Performer’s Festival, which is called SPRAOI Festival (pronounces /sprii/) means FUN in Irish. Reading the name doesn’t make any sense how to pronounce it, so it’s better to write it down to remind it. It seems that in the Irish language they are very generous with writing different letters into one words and it seems that just in case, they have written them always more than they are ever going to pronounce. That makes Estonian so easy-peasy, in spite of all its 14 cases, but at least we pronounce how we write. 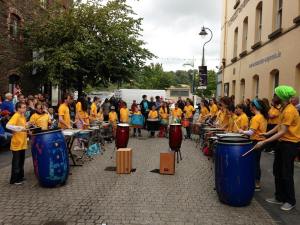 The centre of Waterford was very nice and the people who had come to see the performers didn’t mind the rainy weather. Fortunately, it wasn’t raining all the time and children could enjoy the performances. Especially cool was the drum band from Ireland which consisted of children in different ages and of their really enthusiastic teacher who encouraged them to play and act, what they did really good. 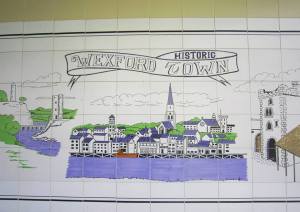 As the big clouds arrived we didn’t stay for the fireworks and we were smart because it started to pour rain and I don’t know if they could carry out any fireworks with such a weather. I would definitely want to come back to Waterford and spend some more time there.

We visited also Wexford, but that was a short visit, just got a glimpse of the main shopping street, so I must come back there too, and probably I will.