This year the Luminosity Festival had moved by the river side and the show was displayed on Dublin’s Custom House. The first year in 2014 it was on the Trinity Colledge and the last year on the house near St Stephen’s Green, which we, unfortunately, missed because we didn’t find any info and supposed that it still had to be on Trinity’s wall.

This year we were well prepared and went to see it a day before the New Year’s Eve, just in case. It was the first day after the flu when I felt that I wanted to go out and so it was a nice walk from home. Even the weather was nice.

The location of the show was perfect, probably the best of all these three because it was also possible to watch it from the other side of the river and there wasn’t too much traffic in front of the Custom House. But I have to say that I liked the Trinity College Light show the best, maybe because that was my first one. We watched it from the Custom House side at first, then walked over the bridge and watched it once more from the other side.

It’s always so nice to be back and feel that nothing hasn’t changed, only some things have appeared or disappeared and this time the Christmas lights had been lit just a few days ago. The lights in Grafton Street were turned on earlier but the lights on Henry Street had been turned on just at the weekend before I came. This time they had changed the lights and there was again something new and Dublin had got a bit different face for these Christmas. When I am coming back for the real Christmas I will definitely look around a bit more – do some window shopping and some real shopping, check the Tayto Crisps Sandwich display at Arnotts and visit the Christmas Markets all around the town, go to listen to the Christmas Carols, see the Luminosity Festival , the New Year Parade on the last day of the year and enjoy every single day of these weeks.

But despite the Christmas lights on the streets, the trees in front of our home were still yellow and it felt like in October. That’s OK for me – I will get snow in Estonia anyway if I want it or not 🙂 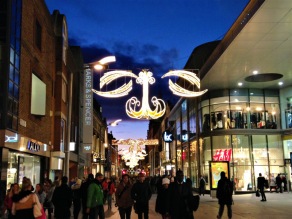 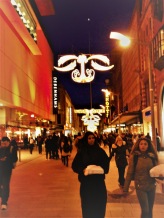 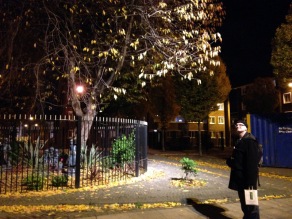