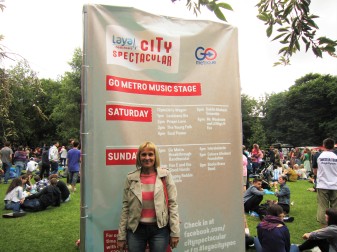 It was a nice small music festival, even the weather was sunny and warm and no showers at all. So we enjoyed almost all the groups and picked up our favourites. One of them became my real favourite, so I even got their CD.

On the first day we were not clever enough to bring our blanket, but on the second day we took it seriously and laid down on the grass and listened to all the bands and I really felt that the summer had begun.

The best of the day was Gypsy Rebel Rabble – and I have got their album now.

Interskalactic – a big band with a Jamaican flavour.