Dublin, that is called  Baile Átha Cliath in Irish, is a big city.  Of course, it’s the capital of Ireland with population over 500 000 people, but if walking around it doesn’t seem so big at all and if you don’t want to walk around the busy streets it’s possible to escape into several nice parks which are situated so near to each other that you can just walk a bit and there’s the next one. So we did.

We started from Trinity College that has also lovely green areas around the old buildings and the world famous Book of Kells somewhere inside the old Library. I remember pretty well when I learned it at the University, but not so pretty well to talk hours about it. I guess that they turn the page each day, so it’s possible to see different pages when you visit it more than once. Actually, the Book of Kells is an illuminated manuscript gospel book, that contains the four gospels of the New Testament and it was created somewhere around 800 AD. Maybe one day I will go and have a look at it, but this time, it was just a plan, that was not put into practice. The name of Kells comes from the Abbey Kells where it was held for centuries, where it remained until 1654 when Oliver Cromwell sent it to Dublin for safekeeping and from the 19th century it has been on the public display.

This round sculpture is called Sphere Within Sphere and it’s made by an Italian sculptor Arnaldo Pomodoro. Versions of the sculpture can be seen not only in Trinity college but in different places of the world, including Vatican. Anyway, it seemed a nice background for a photo and as we had our photograph with us for the whole day, it’s not the only marvelous photo that we have got from that day. I didn’t know then that this one might have opened the session for my sculpture photo track because that idea came to me some time later. 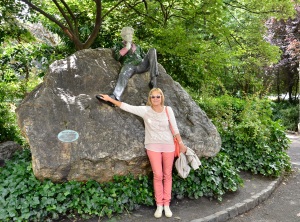 After that we headed to Merrion Square Park, which is a bit wild, you can really walk through the bushes and little, crooked paths under the big and old trees. At least it’s not such kind of a flower garden, but more like a place where young kids would like to play Indians and climb the trees and if you are a bit out of the tree climbing age you would probably want to lie down the grass, watch the clouds and enjoy doing nothing. The sculpture of Oscar Wilde enjoying himself on the big stone is a good example of that nice feeling of doing nothing but still being happy and fully alive and if the sun makes you to shut your eyes for a while,  you are definitely not sleeping, but resting your eyes.

Although the Irish playwright spent a great deal of his time in England the country of his birth has chosen to honor him with a statue in Merrion Square Park.  As it’s possible to find a lot of proof that the sculptures of Dublin have a lot of nicknames which maybe always don’t sound so very polite, but at the same time quite funny, spiced with a bit of Irish humour, this much loved Irish Writer has also a nickname – nothing less that “The Queer with the Leer”, which sounds a little cruel perhaps, but in spite of that it doesn’t absolutely mean that they don’t love their great writer. They do of course, nevertheless of that name.

Merrion Park is also famous for its summer events, concerts and festivals. So are the other parks in Dublin of course, but I was lucky to take part of one of the Music Festivals there, but I will write a bit more about it in some next post.
I got some quite interesting facts about Merrion Square from a page called “10 things you probably didn’t know about Marrion Park” and I have to say that I really didn’t know them. I got to know that Oscar Wilde, Yeats, and Daniel O’Connell have lived on that street, that Oscar Wilde’s mother used to hold a salon that was visited by Bram Stoker and that about 250 years ago the place looked like a farmland on the edge of the city and it was possible to see as far as the bay. They started to build the Georgian houses to Merrion Street in the 18th century.

After Merrion Square, we walked a bit more and very soon reached the St Stephan’s Green Park. On the corner of the park, there’s a statue to commemorate the Irish Famine(known in Gaelic as An Gorta Mór). These pillars surround a statue of the 18th century father of Irish republican, Theodore Wolfe Tone and although it represents one of the darkest periods of Irish history the Dubliners have given it a relevant nickname and call it the Tone-Henge (look at the shape of the pillars:)) The park was officially open to the public in 1880 and is very near to one of the biggest shopping streets in Dublin

– the Grafton Street. Just over the street lies one of the most beautiful shopping centres that I have ever seen. It didn’t look like a shopping centre at all, it called to my mind a picture of a resort town musical theatre or some other place where people walk around with big hats decorated with bows and feathers. I was surprised to hear that it wasn’t built somewhere at the beginning of the last century but in the middle of the eighties, not a very romantic time by my mind. When I looked up some information about the shopping centre I got to know that it was built instead of a marketplace that had really wonderful name Dandelion Market, which used to be a place with stalls with all kind of punk stuff, like badges, clothes and posters and where U2 used to have several gigs. What a pity that I didn’t have a chance to see it in these days.

St Stephan’s Park was quite a different story – gorgeous views, large well maintained green lawn, flower beds and ponds with swans swimming around and therefore it looked like a place where to make nice photos and just walk around slowly, happily and proudly.

It gave a bit the same feeling as our Promenade in Haapsalu, especially when to think about it’s beginning with all these well-dressed people promenading around and showing off themselves. So we walked there a bit, watched the people who had come out to spend their day in the green and the birds and children who were feeding them and headed out of the park. In every park there are signs what is prohibited in the park and one of these things was playing ball. That didn’t stop too not-yet-grown-up young men playing ball and worse, trying to swing with the tree top. It was something that probably every country boy has tried somewhere at the age of ten somewhere in his nearby woods, but it was definitely not the perfect thing for 25-year olds to do in the public park. Fortunately, they didn’t break the tree. 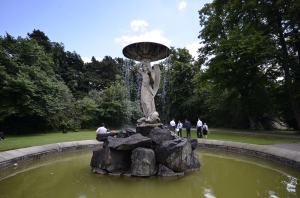 Our park tour ended in a small and niceIveagh Gardens, which was the favourite of Sean, because of being a real secret garden in his childhood. That Park was established in 1863 by Benjamin Guinness, the 3rd Earl of Iveagh, the grandson of the Arthur Guinness,  who started to brew the Guinness beer and became the richest man in Ireland of his times. 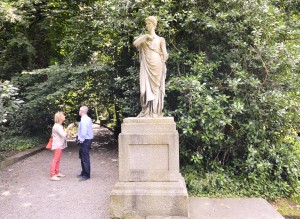 The Park was really a jewel and even the Internet says that it’s the least known parks in Dublin. It has retained its style being between of French formal and English Landscape styles and therefore looking just as a place where to come to be on your own and think your secret thoughts. Unfortunately half of the park was closed because of the oncoming Festival, but it was nice to walk around in Rose Garden, it even didn’t matter that the season of blooming had come to an end, to discover all these little fountains, pools, paths under the old big trees and nice statues hidden underneath them. 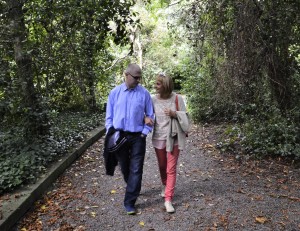 So after every time you feel tired or want to get away from the rush and traffic, you can find a small secret garden just around the corner and it seemed that a lot of people, not only the tourists had found that to be a good idea and were spending their time just enjoying the green grass, the sun and fresh air with their lunch box, children, dogs, or friends.

I really want to go back to all of these parks and take my time to capture the feeling, this time with my book and lunchbox and probably have to pick one of these sunny days that are not so rare as I was afraid of.